American Authoritarians -- Not as Ironic As We Might Hope (Apparently)

A fairly traditional view of the American electorate has expanded now to show us a part of ourselves most of us would rather not see: American Authoritarians. Many of us will deny and project this “new development” onto “them” in order not to see. My invitation here will be to counter any division with a “we have met ourselves” here in this moment. A wide array of research from anthropologists and social psychologists finds a pretty consistent showing in all countries across the globe that at least 33% of the population has authoritarian tendencies. Knowing the seeds of all of this in ourselves is the only way to prevent its continued expression ‘out there’ in 'our' future. Let’s you and I take a good long look. 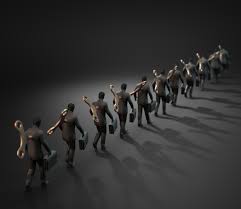 I am building upon the work of Brian McLaren in his recent essay “The Five Electorates in 2020,” which can be found in its entirety here, or in brief definitional summary given down below. You will recognize familiar terms in our political discourse today, even though any schematic is only useful with its next improvements.

Voters in the United States today come in clear ‘flavors,’ whether Democrat or Republican, Conservative or Liberal. More recently, Independent. These terms are more indicative of historical structures and less communicative about the driving forces behind voters choices. The terms Traditionalists, Conservatives, Liberals and Progressives get at the driving values behind voting patterns. (You can see summaries below). So far, all of these terms describe different orientations to the rules and norms of democracy, with all honoring the fragility and yet powerful presence our democracy/Republic lives in our collective world.

Brian McLaren argues we will all benefit from an alternative way of viewing American politics today. “There have been four kinds of voters in recent elections, but now, a fifth voter element is emerging, and that changes everything.”

Authoritarians. These Americans find security and delight in submitting to a powerful leader who promises to protect them from all enemies. They value only one thing: winning. To achieve this, they portray toughness--even cruelty and violence--with no admission of weakness or failure; display an unapologetic willingness to break any and every rule to win; demand absolute loyalty to the leader, offering constant praise and adulation; sacrifice truthfulness and critical thinking, because the leader alone defines reality; reward those who submit to him as good people and punish all who don’t as bad people; and suppress all dissent.

These Americans are those of us whose rules and norms conform to a centralized power (whether individual, party etc.) rather than to the values and historical practices of democracy. Power is centralized by means of fear, division, distortion or diversion and suppression. Fear is employed to counter a real, exaggerated, or concocted enemy to activate and unify followers behind the leader. Society is divided based upon an absolute loyalty to the (individual, party, etc.) and hostility to the identified enemy. Gross distortions and diversions of truth mean what is true is only what the leader says. Any acts of dissent, especially by protestors, opponents, or the press, must be squashed.

At this point, it’s easy to feel the temptation to push this as far from myself as possible, joining the chorus of those who condemn such ignorant, uncritically-reflective, and dangerous ‘crazies’ that we cannot believe are actually in our beautifully-messy American democracy. That is not who we are. That is not me. But here’s the thing…

Fear drives me to the rejection of them and the denial of their realities. Which leads to more division. They have nothing to do with me, nor I with them. Which hides what is true before us--we are in this story, like it or not--in attempts to divert and even distort what is clearly unfolding in our collective civic world. Then...It won’t be long before apathy and cynicism set into my bodysoul...signals of an inner suppression…

The authoritarian pattern may be raising its ugly head in remarkable ways in our time, but this pattern is already always within us. I’m not saying “we’re all authoritarians” at all. I’m saying that authoritarianism is here, and so its patterns are already working in all of us. Some express it outwardly, because it matches what their internal fears and consciousness drive in them. More (I hope) are not expressing it outwardly at all. But we are internalizing it every day the pattern speaks in the news, yanks our chain in fear through social media, lives in our neighbor with whom we refuse to speak.

So how do we counter the pattern without its dictating our responses? 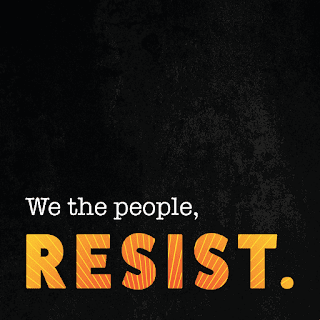 From the day after the election in 2016, when Hillary conceded the election though she had won the popular vote, there has been the call to Resist. #Resist. Yes. Yet this feels so very much like the fundamentalist irony with which I have lived most of my life. Scientists can often (unconsciously) become ‘liberal fundamentalists’ to counter the claims of religious fundamentalists. It seems the most logical thing in the world, to use reason to counter a religious fundamentalist, whose primary tool is already placing faith in opposition to reason, as defined by scientists. Unending conflict is assured, with no one listening to the fundamentals of the other, and more importantly for here: no resolution, ever.

Results? Disdain and refusal. Which I totally get...having lived in the tensions in my own family. Ironically, it's the scientist in the family who first realized the damning impact of disdain and refusal. This now means he often bears the disdain and refusal of his 'religious' brothers, unaware how disdainful they are being. Authoritarianism confronted could play out this same pattern, and often has with those under the banner of #Resist. To not #resist like we are means you are complicit. Fear runs the show. Dissent from a 'liberal view' means betrayal and deception of the cause of liberation or against him. The energies are so similar...I get wary.

So how do we awaken to the authoritarian pattern, gently, vividly, all around us…without succumbing to its force-energy-pattern?

I say it has to begin with the body, to matter. Soften your belly, breathe deeply into your body. Soften your heart, or allow your heart to breathe into a spaciousness that awaits... This is a willingness to open, to become vulnerable, yes...Then...

This next one may be harder, particularly if you've been viscerally wounded by an authoritarian (of any stripe)...so it's not for everyone. But for those who can: refuse to be divided from “them.” Draw close. Sense and see the sadness, grief, anger driving the need for a strong man and overwhelming authority 'out there.' Don’t pretend or assume you will change anyone, but don’t be divided from “them.” Draw close and stay curious.

Stay focused on We the People, the gift that a messy democracy is to the planet, when it heals and grows stronger. Honor traditionalists, conservatives, liberals, and progressives for the contributions each makes to the whole. Don’t get diverted from the Whole. Don’t give energy to the Distractor or crazymaking. Stay focused on We the People. Even when it seems hopeless...

Refuse the suppression of voices, including the authoritarians. We authoritarians may not value democracy but a strong democracy will protect the rights of dissent, even our own. To try to suppress the authoritarians is to "become them".
All this is the learning about how to live with fundamentalists for me. The trick to stay engaged and inviting of everyone to the table without allowing anyone to think the table is only his/hers/theirs. The more rigid-expression Americans amongst us try to make this Table all their own, and despite their best attempts, it’s simply not. But none of us will change any other either. It’s always a journey before us, if we choose…
Meanwhile, we would do well to not judge authoritarianism too harshly, even as we work with all our might to hold a different kind of space, a generous space, a welcoming space, a compassionate space for the awakening and evolving of all. One heart at a time, as ever. Because just wait until the situation is ripe for yourself. It's in our collective heritage, this patriarchal/strong-man pattern, which means it's in every one of us in some fashion. To deny it is to invite it to emerge in unconscious ways...like being militant for peace, or shaming a sister while striving to be a conscious feminine community.
The pattern always remains, and will be with us for a long time to come. It is in our best interest to awaken to it within, so we may counter it without.
* * * * * * * * * *

Our American electorate is organized largely into two parties, but voters within these parties have clustered in four distinct ways.

Traditionalists are those who feel less at home in a world of rapid, rampant change, and seek a return to old-fashioned values like hard work (including physical labor), close-knit families that show special concern for children, mothers, and the elderly; character qualities/virtues like honesty, decency, respect, self-discipline, sacrifice and service; and faith communities that form character and contribute to the common good.

Conservatives are center-right voters who believe in a strong national defense, free and fair markets, individual freedoms with minimal government involvement, property and privacy rights, and the dangers of debt and need for fiscal restraint.

Liberals are center-left voters who champion America’s growth and global leadership, protect the working and middle classes from dangerously powerful corporations, promote human rights and democracy around the world through aid and international agreements, and good government, right-sized to meet the needs and opportunities of the moment. And finally,

Progressives: voters uncomfortable with the status quo. They courageously face climate change, honor the dignity and diversity of all people, preserve and protect local economies while being good global citizens, and humbly tell the whole truth, including uncomfortable truths about our nation’s past and present injustices. In typical primary seasons in recent years,