Part One: Fake News! and the Quest for Certainty 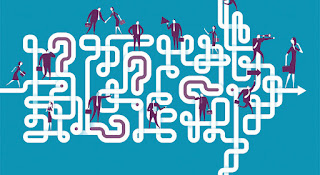 Today I want to start with the tendency in many of us--perhaps most of us?--to decry the news, to disbelieve the news coming from “there,” distrust “the media,” even condemn the news as “fake news!” I have a proposition for y’all, which may (or may not) offer some grounding-centering work for the days ahead. This comes from my own place of feeling those currents, of course; I doubt any of us is immune. I have my own certainties about the news media I trust, which I do not, and the absolute necessity and paradoxical bind of media-news-outlets today.
My hope, ultimately, is not to provide certainty for you, but a new quest for assurance that lives in your skin-heart-bones in a new way, a different way. Ultimately, you begin to live into a world aware that the paranoia and distractions around “the news” matter little, and the journey toward healing our democracy invites a different way of being in it all.

This is too long even for me, the longest blogger I know--so--

The gist of what I will say in Parts One and Two...Part One today...

We are awash in a quest for certainty in a world that will only grow increasingly uncertain. Our reactivities are increasing the unconscious and increasingly violent expressions of this quest.

We have access to a vastly more peaceable way to live in a quest for assurance, which requires an attunement to the felt sense of some things familiar yet unfamiliar too: reducing reciprocity, insufficient reason, pure assurance, compassionate advance, and strength in weakness.

If you are curious, pull up a chair and make yourself comfortable. These two posts are longish, as I remember and learn. To be clear right from the start: insufficient reason here does not mean irrational or living with the faith of a child. Both of those are contemporary accusations or denials enslaved to a quest for certainty. The principle of insufficient reason emerges only in Love’s horizon, the rationality of which upends our human expectations in ways we call Grace, Mystery, Salvation, Caritas, Love.  What follows next in "quest for assurance" is some of the best, most precise philosophy and theology I have been blessed to receive--of course, in my own popularized, practical distillation. I wouldn’t have wrestled to condense and distill if I didn’t think it was worth it, for me, but perhaps for you too. Freedom to live in uncertainty beckons, and healing our democracy will strengthen when more of us are free like that.

We have watched the familiar distrust-disbelief dynamics about the News play out with the now humane-tempered news of a COVID-19 diagnosis affecting the top echelons of our country’s Executive Branch of government. [I continue to stand with the invitations to each of us to do our own work in these matters, to discern and listen for our own distinctive/individual reactions, refusing to judge them but also not denying or hiding from any unfavorable self-knowledge because of these reactions.]  “I don’t believe Trump is actually sick. Nothing his administration says is true.” “Fake news!! Fake news!!” shouted and now written on t-shirts. “You can’t believe the liberal media about anything; everything they write is anti-Trump.” “Fox News is Trump’s News, more reality-tv-show than serious journalism.” And of course, now, from liberal and conservative news sources alike: Confusion and Conflicting Reports Surround Trump’s Health. (May he and his family be a blessing in good health…)

We seem to demonstrate here that certainty will provide something we need here, today, now. We need to be certain of which news story is true, right, defendable, connected to a consensual reality. Social Media has provided “Snopes” like venues, for us to “fact-check” all we can. And these things are important, crucial even. Many of us hold onto science as the Guardian of the Galaxy, providing its rather meager toolbox to defend against the authoritarian-esque barbarians at the gate--conspiracy theories, religious fanaticism, and more. Without care, however, science can become one fundamentalism amongst others. Just try to get Richard Dawkins to engage a quite epistemologically elegant exploration of science and theology. He’d much rather combat the fundamentalists of literalist Scripture folks. Straw-men, easy to defeat, and yet straw-men that have made him a fundamenalist in his own way. Our quest for certainty has blinded us from so much, in our desperate need to make sense of an uncertain world.

In a society like ours, with a technologically-minded sense of reason, certainty does provide much that we desire. It provides rationales for depending upon products/consumer-goods. It calms economic markets with algorithms to be understood and predicted for plausible economic stability. Relationships need a high amount of definition--as do our bodies--so we know who we are and with whom we will be most intimate. Certainty here suggests dependability and authenticity with a sense of transparency and collective ‘common sense’ in how human beings ought to propagate and live in a civilized fashion in family units we know. Certainty professes that it will provide the pathways to justice and the order of law. What is written is expected to be literal, obvious, and certain.

I want to say here that this quest for certainty today is one of our largest collective problems in becoming more human today. It is playing itself out here “on the media” but the media is not, nor will ever be, ultimately responsible. We feed the media. We read and we buy what we will. We are responsible, collectively.

This quest for certainty is heightening our anxiety to unforeseen and overwhelming proportions, which few of us know how to hold, so we pour it into social media, looking for confirmations and comforts needed within. We condemn the journalists of ‘their’ choice, reserving our hope of certainty onto a smaller and smaller corner of the ‘media market,’ which just isolates and insulates us into our bubbles of preference. This quest is making us suspicious of one another, as what we are viewing, digesting, and receiving is more uncertainty than any one person can withstand. And it does need saying: many at the highest echelon of our federal government are maximizing this uncertainty for their own political gains. These representatives tend to be fundamentalist and/or authoritarian in nature. They are identifiable in both political parties. They are particularly manifest today, however, in the party in collective power. So we project suspicions onto others who do not share our worldview, or who contradict what we think we know...in a world that is nothing if not completely uncertain.

What in your life right now offers you unending assurance? What has offered you assurance in the past?

How does your uncertainty dance with these pieces in your life?