Who We Are Then...Let's Just Claim It

I’m getting a much clearer picture of where I live today and who I really am, truths that I hope will set me, those I love, and those I do not yet know free...a freedom for more than a freedom from... I’m not sure what the import or calling of this new clarity will be...

I’ll begin where many of us seem to start, here in the USA--a TV show. My husband and I are through the first season of a rather satirical show quite uncharacteristic for me, if not for him. He likes things like House of Cards while I choose to watch only West Wing. He likes the show actually titled Dark and I’d prefer to spend my evening seeing Moonstruck for the hundredth time, or the sentimental Our Souls at Night. Life is hard enough as it is, I figure, so why watch TV that mirrors life as it is instead of how it could be? I do always agree to watch the first episode of anything he might choose, but I also refuse to stay in a world where every single character is unhappy. Like Mad Men, the advertising drama that won rave reviews and artistic creds. Why spend my time there? I would ask him. Not one character is happy or shows any hope.

But this show--I’ll call it a light-noir on Amazon-Prime--has been cathartic for me, for some reason: The Boys. It’s a topsy-turvy ‘superhero’ universe in which the ‘heroes’ are pawns of corporations and the only really moral character, a young white man named Hughie, is being shaped as the super-villain to come. It has much to recommend it, at least if you don’t have a tender stomach. Maybe it’s cathartic because the writing shows me something I can now more easily point to in my world today. It’s good to get it outside of me, truly look at it.

The character with whom I want to begin, the character who really shows me today where I live and who I am inside, is Homelander, the strong-man of the “Seven:” a flag-draped-caped blond-haired, blue-eyed muscle man who was raised in the lab of an American scientist. Without spoiling the plot too much, there is a divide in popular perception about super-heroes. The bulk of the world lauds and applauds whenever Homelander steps into any public gathering, on stage or not. He is acclaimed for keeping the public safe with his superpowers. 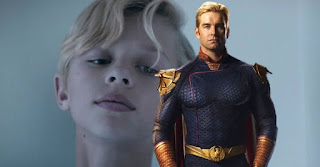 The reality we get to see slowly revealed over 6-7 episodes is quite different. There are “collateral damage” support groups in hospitals and churches--those who have been seriously wounded or have lost a loved one because a ‘superhero’ made a mistake or misused his/her power. There is a marketing team to make sure the truth of those ‘mistakes’ does not ever get the big screen. And the Vought Corporation is lobbying the government to use “their product,” super-heroes, in the armed forces around the world. Eventually, you can see each character as a person with intense grief and pain, enthralled or addicted, being a pawn in a game they have no real idea is being played on them. Even Homelander himself.

In this scenario, he is the public-strong man, but in actuality, he is a grown man who is unmothered, unloved, insecure and “kept” in a lifestyle he has known at the Vought Corporation. To quote a fellow I read earlier this week, “He is a weak man who has always longed to be a strong man, and he is a weak man’s idea of a strong man.” [Anand Giridharadas, Winners Take All: the Elite Charade of Changing the World].  He is the by-product of an American scientist who created a little boy with Compound V to have super-hero powers--laser-gun eye sight, indestructible skin, capacity to fly anywhere on the planet in moments, etc. This little boy had no woman in his life, ever, nor any human touch, affection, connection, belonging. He was and is the “prime product” of a Corporation.

Ultimately, for our purposes here, today, he is a white man who has never truly known what being human is.... He’s never known the love of a woman, be she a mother, a sister, a life companion. He’s never known the gift of being himself in a family; he’s only ever had to protect or defend other people’s families. He’s certainly never known or had mirrored to him that he is loveable just as he is. He doesn’t know how to love himself. No one has ever shown him how. 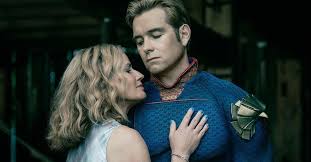 The relationship with “his director” at the Corporation is a grotesque but easily recognizable parody of a loving relationship between a professional-corporate woman and this so-called “strong man.” Sometimes she plays mother to his unmothered child-self. He suckles her breast and coos in her lap while she uses her body to satiate his anger, his need. Sometimes she plays seductress to his physical prowess, riding on top of him in a sexual encounter in which she yet slaps his hands away, attempting to stay safe amidst his overwhelming power that could easily wound her in a “loving embrace.” Ultimately, she is a professionalized woman who has “made it” in corporate life, all while enslaved to her internalized fear of the very product she is supposed to “sell” to the public.

I think I’m drawn to Homelander today, of all days, because he lives visibly into a fictional universe the grotesque damage all around us today...which includes damage done to him, done to men and successful women who have learned to live with internalized fear of men in our world today, all of whom then do overwhelming damage to women, children, and to the earth. I’m drawn to this caricature of a man, of a leader, because this is actually who Ohioans have chosen as palatable and the ‘necessary evil’ for their economic or ideological gains. This is where I live and so this is where I am--at least, if I truly stand in the Oneness of things, which I do.

We in Ohio are a man who

I think I have coped and navigated these last four years with an assumption that Homelander is the anomaly in our country today, even our world, arguably led by the beacon of the American Idea, the Experiment of a constitutional democracy-dancing-with-Republic. Today, I’m not surprised or even shocked, and there is even a lightness in me to finally come clean with who we are as citizens of the USA. This is who white America is today, so let's finally come clean about it. Denying it just pushes it further underground and onto "them," who we divide from our "we." Something in our "us" is in all of us, and this something today is Homelander.

We are Homelander and those who have crafted lives in fear of Homelander, so much so that resistance remains impotent, focused in solely ideological-identity-politics ways. We are fighting ourselves and denying, blaming, injuring the earth and her vulnerable more and more in our denials. So much effort has been spent trying to get the American Collective to approve of our identity(ies), to not kill our people, or to legislate our identities into a collective that has only ever been governed by Homelander's damaged self/selves. We then try to push this weak-man's 'strong-man' toxicity away, saying it is "them," over there, not "us"...not at all, anymore. Further isolating. Further damaging...

Homelander is not an anomaly. It's who we have allowed our Collective to become, as the white-suburban-rural tyranny-of-the-minority-United States of America, duped by a weak man's idea of a strong man, lived by the white Christian men we were duped into believing would save us.

At least, this is who Ohio is today and I live in Ohio. If I profess the Oneness of things, which I do, then I am Homelander.

"Christians" shaped by masculine dissociations will push this "we" away next under the notion of sinfulness, using other such doctrinal categories/terms to diagnose a human condition always damned. I think that’s a cop-out and a weak-response of weak-minded men and male-identified women who want to remain emotionally unaffected and hope it'll be better "out there." No matter what happens in the next couple of days, at least we can now finally see who we are right now, willing to make bad choices for even worse gains. It's better for all of us if we really let the pain and grief and unhealed trauma BE FELT as deep as it goes. And then do that again.

For until we do, we are so far from being fully human, and many of us calling it "Christian." Many of us will shake it off and say it's not that big a deal, whatever will unfold here in these next years.

Here in Ohio, we ARE Homelander.