The Women are Gathering...to Get **It Done

A funny combination of events landed me into a private Facebook group on New Year’s Day, which overwhelmed me with welcome and made me feel a bit less alone than I’d been feeling here in Ohio, pandemic bubble of 2.5. This is one of the GREAT things about this country we love so dearly, right? As I’ve smiled, in gratitude and curiosity, observations and feelings have been arising. The group recently changed its name, welcoming a larger network of administration required for its increasing size, and I find myself toying with the words, like playing with the food on my plate, a bit. If you've interest and stamina--probably a 3 minute read--you'll hear a bit about against-Trump and suburban wives/women, all for love of country. You'll get to learn the name of the private FB group too. :) 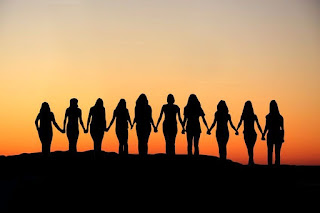 The group used to have “Against Trump” in its title, which I’m glad the admins have omitted entirely. The civic work before us--and I mean us all--cannot begin in earnest until a new frame opens in which all voices are welcome and can speak openly. As my dear uncle blogged back in 2016, before Trump became President of the United States: Donald Trump is just a Weed. He is not the problem, but a symptom. Our civic refusal of one another has created toxic ‘soil’ that grows ‘weeds’ like him (and his increasingly violent loyalists). If we want to weed out the toxicities, we need to begin with us, not him, and not ‘them.’ Us. All of us. Liberals, Conservatives, Progressives, Traditionalists... [Of course, a renewed ‘all of us’  will be necessary to unite peaceably to confront the American Authoritarians in our midst. In this sense, there is a ‘them’ here I cannot and will not deny. But this confrontation needs doing in a way that is not authoritarian or soaked with liberal disdain or conservative denial/silence.] Let’s all move Trump off the stage by simply beginning to talk with one another again about things that matter, that we can work on together. Let’s get to the painful work of healing who we are as a whole…

The group also had Suburban Housewives in its title, now known more broadly (pun intended) as Suburban Women. I startled then laughed aloud, realizing that this label could refer to me in the letter, if not spirit of it. I do live in a suburb of Dayton. I am a wife who lives in this house. But yeah, no one would ever confuse me for a suburban housewife. (Though I am white, which Google images largely shows as a constant image...even with "black suburban housewife" as search term. Interesting to note...) I can say most anyone around me would know I celebrate fiercely any woman who has chosen to express herself in these choices popularly conceived--suburban home, family life, mini-van, volunteer time in community venues (faith, sports, city, more). I myself simply chose not to have children--my first and last act as a mother, I usually say. (Yes, story worth naming sometime). I am ornery with traditionalism of all sorts, though I am a Presbyterian clergywoman and seminary prof who teaches religious leadership. (Go figure).  My husband knows never to use the word wife with me. I hate it. Have always hated it. Almost didn’t get married because of it, but I do love this man I live with. (I use ‘husband’ because he likes it). My husband’s and my paths of service simply led us into ecclesial settings in which we both thought transformation could happen. “Living together” was not an option. He’d guffaw if he realized I was even saying I could take on ‘suburban housewife.’ But moving a group name of suburban housewives (seemingly a particular voting block) to suburban women (a larger voting block) is better, broader, more inviting of more of us. And I can say aloud that’s me and that’s more of us. 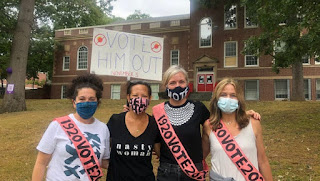 Then we come to engaged, empowered, and pissed in the new name. These words are words I can get behind and within.  I know all of them well, and those around me would agree to them within me. But what I need to say next will be hard to stomach: Donald Trump--when he’s gone, if and when our elected representatives DO THEIR JOBS--has actually given the USA an incredible gift of a wake-up call. More of us, and many of us across previously rancorous political lines, are drawing close together to review and renew, see the ugly and act for the better. I knew his presidency would be painful. I knew he is/was a narcissist thrown into more power and more responsibility than he could ever handle well. I know not to “believe everything” any corporate news outlet prints/publishes about him--liberal, conservative, extremist--but one only has to listen to the hour-long horror of the phone-conversation with the Georgia Secretary of State this afternoon to hear how far he’s gone into madness and refusal. Because of Trump, more of us--hopefully enough of us to learn and listen across our divides--are becoming engaged, empowered and pissed.

So...you can probably figure out now that the group is called Suburban Women Engaged Empowered and Pissed, or SWEEP. As the soul-sister who invited me into it wrote: “It’s a great group of empowered and empowering women that might lead you to a more local network of like-minded women. Most of us aren’t Suburban or Housewives anyway,” she named with a smile emoji. It was originally founded as SHAT, Suburban Housewives Against Trump, by “Kentucky power mom” Loni Yeary Gentry in the run-up to the 2020 Election. (I love her self-identification there...YES). And it has certainly taken-off in terms of participation. The group now seems to be administered by Red Wine and Blue, which as far as I can tell is an action-network for progressive causes. RWB was founded by Katie Paris, a suburban woman in Shaker Heights, Ohio (a suburb of Cleveland).

SWEEP is “a community for ALL women who love our country, but know we can--and must--do better. … Together, we will stand up for each other, own our power, and get shit done.” I’m in. I’m supported by circles of women, writing for change, living circle into the world for this kind of change. I’m in.

What kind of shit can the now over two hundred thousand women collaborate in getting done, though? Will it include liberals taking a hard look at our own refusals to see the grief-ridden middle of the country? Will this group include women who will be engaged in healing the Republican Party? It’s in all of our best interests for our country to have a healthy party of listening opposition. Will it include each of us hunkering down to do the hard inner work of living compassion for those whose politics make our blood boil? How do we get this kind of shit done, publicly, together? I wonder and will be listening, learning…with a new network of remarkable women. Blessed be...

I will conclude by saying part of me is disappointed in the name change, if only because SHAT--the past tense of shit--is where so many of us seem to want and need our country's last year to be. I wish a lot more had already been shat and flushed. 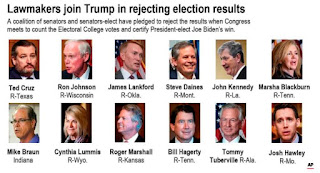 But then we wouldn’t have quite as many opportunities to live and learn together, would we?