Being Where We Are Now...

I’ve never listened to a live-news reporting of a US Senate roll-call vote before. Or at least listened from start to finish. The formal process requires each senator to stand in place when their name is called, tender their vote aloud. Then their vote--guilty or not guilty in this case--is repeated aloud by a Senate clerk for the whole chamber to hear, for it to be publicly recorded. Every senator in the chamber votes and then the president of the Senate reads the final tally aloud, naming the collective action on the item at hand. 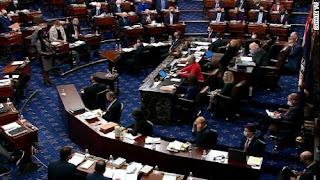 The news of acquittal in the Impeachment hearing is no surprise to anyone who’s been paying attention, and it’s way too early to make definitive judgments what the impact of the Senate’s action (non-action) will be. I found myself distracted by feelings of inversion. Senators who, in my view, were guilty of cowing to a fear of authoritarian politics said not guilty aloud. Senators who in my view are courageous leaders standing firm in the face of authoritarian, violence-prone politics said guilty.

I have been quiet on this page for the entire journey of Senatorial transition into the Impeachment trial, including the recalcitrant scheduling of the trial by the then Majority leader of the Senate, an achingly slow transfer of Senatorial leadership to the Democratic Party leaders into the trial, then finally the collective listening to the arguments for the Article of Impeachment from the House Managers, with the former-president’s lawyers offering whatever it was they offered. 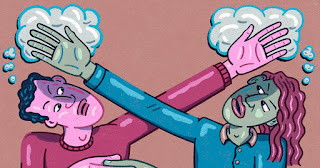 Part of my quiet is tending to my own tenderheartedness amidst the glaring, jarring political scenes we’ve come to tolerate, expect. I’m getting better at discerning just how much I can tolerate and stay open-hearted in my sense of civic-duty, and when I have to shut it all out/down, simply to stay in a compassionate centered place. If I can’t stay there, I’m just becoming what I don’t want ‘out there.’ I know that the news media/social media forays are a gladiatorial display that bears little resemblance to the people and work of democracy on the ground.

I think I’ve been quiet also because I honestly don’t want to know if the Republicans I know and love still stand behind the authoritarian-esque displays of the current Republican Party. Without being disrespectful, I simply cannot bend on this line...and I pride myself on being flexible and open-hearted. So...I remain quiet, unasking, not presuming, but also not reaching out. Will they continue to stand behind such things because they’ve always voted Republican and don’t see any other option? Does their view have to impinge upon mine in any way? Do I just disregard them politically if not in friendship? Do they continue to stand behind claims of fake news about things that are publicly available on YouTube about what actually happened...and what almost happened...in the first really not-so-peaceful-transition of power in our country’s history? I desperately want to know that  the Republicans I know and love see Trump and his minions more and more for who he is/they are...and I desperately canNOT know that they refuse to see it, him, them. I’m simply too tender, fearful...and I don’t have the open-heartedness to let bygones be bygones in something so violently threatening of what we profess to share in common...a love of our communities, our country...

All of this has gotten me to musing about painful difference in my own family of origin, and our strategies for navigating it. I can’t say that we’re a model family in this respect, as I don’t think our current  ‘way of being’ is particularly satisfying to any of us. But perhaps that’s a teaching unto itself, for this purpose here. I do know that our dysfunction, while exquisitely ours, is not completely traumatizing or debilitating. Difficult, yes. Requiring growth and forbearance, of course. I've come to realize that every family is dysfunctional in its own way(s)...some are just more clinically interpreted than others.

The line of conflict in my family is ostensibly a religious one, but as ever, it’s always more complicated than that. On the surface, we demonstrate all the currents of an established Protestant mainline denomination, its fragmentation in schism surrounding issues of human bodies (sexuality, in particular), and resulting difference-in-relationship held with tension and ambiguity where no one is truly who s/he actually is in the presence of the other(s). Translated, this means my folks emerged from rather fundamentalist religious traditions (Brethren and Baptist), found a faith community more rational and well-suited to their life in small-town Ohio (Presbyterian). They faithfully raised two daughters ‘in the church.’ Each daughter has lived into Christian tradition(s), if in diametrically opposed fashion: Campus Crusade for Christ for one, seeking-challenging-establishment-prophetic multiracial-multifaith spirituality for the other. Immediate family reunions are jokingly suggested for the Hawaian Islands--my folks on Hawaii itself, Brian and me on Kauai, and Kathy and her family on Maui. It’s progress that we can joke about it. This kidding aside, we do get together for family reunions. We do stay in touch, some more than others. 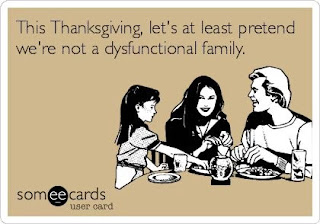 I’m pleased to have stretched to the point of really wanting my sister to be precisely as she is, pursuing what she desires, loving how and whom she is called to love. As I desire that spaciousness, so I practice offering and breathing into that for her, her family. It works so well because she lives in Virginia, of course. It’s easier to live across differences when you don’t have to live in them, locally, every day, or even each week or month.

Living in political differences here locally can be feasible, possible, when those who differ decide not to fan those flames of difference. One of the first posts of this blog was the yearning to go back to a time when we just didn’t talk about politics publically. Maybe that’s a temporary solution for now. I know it’s one that many liberally-oriented FB ‘friends’ are exercising, so I presume the conservatively or Trumpist voices are exercising this pathway as well. Social media makes it so easy/possible. It’s gonna need to be temporary though, or we are precisely back in the bubbles-fantasies instead of the world we’re actually living in together. But what does 'living in political differences' mean if a significant portion of our population uses violence to attempt to hold onto power? And those in the same party do not feel any responsibility to challenge this violence?

I saw a documentary recently that has caught my memory and my heart-strings too: Spiritual Audacity: the Abraham Joshua Heschel Story by Martin Doblmeier. Heschel, of blessed memory, was an Orthodox Jew who barely escaped Hitler’s Death Camps. He arrived into the States having escaped his native Poland, teaching first in Cincinnati and then in NYC. He offers wellknown words I’ve heard often this month: “morally speaking, there is no limit to the concern one must feel for the suffering of human beings, that indifference to evil is worse than evil itself, that in a free society, some are guilty, but all are responsible.” It’s always a bit dicey to bring post-Shoah wisdom to bear upon our times today, particularly as Godwin’s Law comes into play. But Heschel’s persistent and regular confrontation of indifference has landed in my belly, in my craw.

Yet we hear...There is no limit to the concern one must feel for the suffering of human beings…

HOW??? If I cannot open-heartedlly listen yet...if this is going to be a temporary ‘hold’ until I can listen...how is that different from indifference? How do I not become indifferent to the fears and concerns of all those around me? What will be your invitation(s) to awaken out of indifference? Same as mine? How may we find assurance that the suffering all around will not overwhelm us? Or if it will overwhelm, that we will know how to stay open to it, survive it, learn to hold it anew with care, steadiness of heart, compassion…? What is the journey into a  gentle but necessary confrontation of indifference today?

For now, I take comfort in the pragmatic wisdom I can feel here. I can only be where I am today, now. I know I am not indifferent, nor really in danger of becoming indifferent. But some days the fear is larger than the hope. Our political culture punishes anyone for taking responsibility, for saying they were wrong...and now we are living in a collective rupture of our country as a whole... But I'm here, today. For now, that's enough.