This past week danced with the theme of reconsidering citizenship. A friend and colleague, Dr. C. Anthony Hunt, and I co-led an immersion-pilgrimage Retracing the Steps of Freedom in what he calls the Holy Land of Alabama. We took 25 students & friends/family on a 6-day Civil Rights’ pilgrimage to Birmingham, Selma, and Montgomery. I remember cocking my head a bit in disbelief when he named this South-land as holy. Huh? I’ve never previously felt any need to go to Alabama, and certainly didn’t consider it holy.

This afternoon, having begun to rest & listen from the journey, I get more of what he was saying. I could even say I’m just beginning to feel the truth of it. Which is probably part of the reason that on Thursday I purchased a rosemary plant from the Birmingham Botanical Gardens intended for him. She is a Holy Land plant-ally associated with Jerusalem for me. Of course, then I learned he’d flown to Birmingham, with no interest or capacity to lug along a fairly large plant. So now I tend this plant for him at my home in Ohio. Perhaps there’s something holy about that. 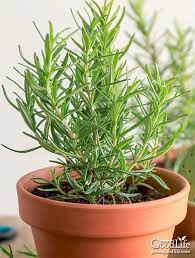 It was a trip of academic attention, quiet grace and (seemingly) unbearable paradox. Some of us were Masters of Divinity students, completing an Immersion Experience requirement for completion of the degree. Others were Doctor of Ministry students, completing their required peer-sessions always scheduled between August & January Intensives. A mother, a husband, a wife, a daughter also companioned the students and leaders, expanding the reach of the journey into more generations, more affiliation. We were an inter-racial community, held gently and graciously as we journeyed through highly racialized traumas and increasingly necessary remembrances. Grace abounded, even as wounds danced and selves had to be tended with care. A small band of beloved community pilgrims even walked across the Edmund Pettus bridge the same day that the first arguments were presented to the US Supreme Court to gut the 1965 Voting Rights Act. Seemingly unbearable, though it also felt divinely coincidental, a walk of hope amidst a people&land plagued with hopelessness and fear.

Reading for my own soul-nourishment today, I came across a Buddhist story that seems prescient for whatever else might come here... Paul Knitter retells an oft-told parable of a man shot with a poisoned arrow. “There he is, lying on the road with the arrow sticking out of him, when some friends come to his rescue. But before they can do anything, he starts plying them with all kinds of questions: Who did this? Why did he do it? Where was he standing? What kind of arrow is it? … Gently but firmly, the man’s friends tell him to shut up. Stop all that talking. We have to get this arrow out.” (pg. 60) 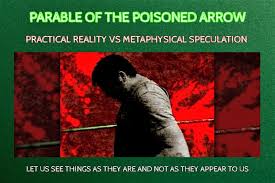 Ironic for a blog-post of many words, but the truth of the parable beckons so forcefully in me.

Stop all that talking. We have to get this arrow out.

The Buddha’s wisdom brings attentions to removing the arrow of suffering from our lives more than the human propensity to speculate, argue, posture. Here I’m feeling all the media-driven hubbub about Critical Race Theory or policing educational settings where our country’s history is being taught or whatever ideological rights’ issue polls say will divide voters and disenchant suburban housewives. That talk. The kind of talk that pretends to be about political reconciliation but which is still defined by the wounds, even continues the woundings, while refusing the humanity of so many of us. To honor diverse perspectives. To open hearts vulnerably into mysteries we'll never see/sense if we don't open our eyes and hearts to them...and the pain they bring.

The most basic wisdom of the pilgrimage was being Beloved Community as we traveled through historically-represented racialized traumas. Each of us experienced all we saw differently, with differing levels of consciousness and expression, but we were pilgrims together, from start to finish. Being Beloved Community. Practicing, learning, (re-)learning how… When one white woman named her experience in a way that was offensive to me, others could hold it with grace. When a black man vented about the wounds that simply run too deep to imagine it could be any other way, others could hold it with grace. The group held the experiences of each, even as the historical tragedies so often ignored today surely dampened the speech of each of us, at different times. We have to get this arrow out.

The Beloved Community was large enough, diffuse enough, to hold even my husband and me as we journeyed through these days together. He has a way of processing that is quite familiar to me but also one which I have had to refuse to hold in these last years. His work is not my own, nor even mine to hold at times. I love him fiercely and it was a challenging week. He’s now felt things he cannot unfeel, things that will ‘cook’ in him for times to come. I’m so thankful he leaned into the journey AND we got to journey together, soul-partners that we are. I also need to own that I want him to be in new places, future places, right now. I know I’m not in charge, nor do I know what he needs—only Godde knows that—and yet I want what I want. We have to get this arrow out. 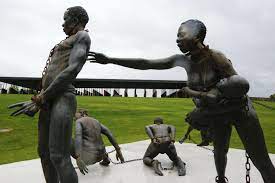 So it was important for me to drive the first shift of our journey home to Ohio, to drive Brian and me back out of Alabama, as my work/path had taken us in. “I still don’t like the South,” Brian said as we crossed over into Tennessee. I can’t say that I disagree.

I did find myself saying something I’d not have said, but for this experience. “Yes, there’s so much to the South that needs healing, even confrontation. But some of the most courageous, persistent and soul-forced people I've ever learned about also lived in the South. Live in the South now. The Black church, the African-American leaders and civil rights’ laborers...they are also the South, for me, now.” We have to get this arrow out.

My rosemary plant will continue to invite me to listen for all that is holy in the fertile crescent of Civil Rights history, this Alabama. For now, learning about community-organizing and development from Mr. Brandon M. Cleveland of the Danial Payne Legacy Village Foundation, hearing the stories of Ms. Joyce Parrish O’Neal (Selma march and movement ‘foot-solder’), walking the ritual-march to the capital at the Interpretive Center with Rev/Mr. Trini L. Moye, learning about black ecclesial theology from Dr. Esau McCauley, and the countless formal and informal conversations with fellow pilgrims along the way…these things are holy now.

Because of them and our journeying, I can better feel the unbearable ironies so many live every day…amidst the enslavement of white or power-over minds to an idea of our country that has never quite existed, nor does it therefore need to be defended through blind acquiescence to stories we were told in grade school. We have to get this arrow out.

Part of what feels holy is some answer to my own prayer. An idea is percolating in response to my question(s) surrounding What to do with all the toxic white masculinity that surrounds me/us so? How are we to love the ones who refuse love, those who profess love while entranced in fear-drenched hatreds that only masquerade as "Christian love"? And how to do this without judgment or projection? Enacting MLK's Beloved Community is clearly an avenue, a practice, a path. Academic attention, quiet grace, unbearable paradox. Nonviolence, even as one could argue the moral conscience of the nation has eroded and publicizing media will offer little protection of classical civil disobedience unto reconciliation, peace. We need to enter in anyway...together.

Within that, a concrete idea has begun to grow within me: identifying and researching the documented lynchings in Ohio, so to work toward memorializing each one on the land on which it happened. It's already been done in Athens, Ohio, for instance, in the Christopher Davis Community Remembrance Project. 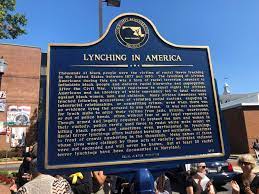 Perhaps documenting and naming racialized terror that happened not that long ago...memorializing and honoring the innocent dead...perhaps these could be small steps toward awakening more of us in Dayton, Ohio to the racialized terror being ignored and refused, all around us.

Or perhaps this researching-work is simply for me, so to visit the land(s), to sing over the aching dirt... I don't know. Yet.