Learning to Stay...See...Stop Resisting? What We See

I am wrestling with a tension in myself, seeking discernment amidst incredibly shifting sands. I am staying with the discomfort, or learning to stay as Pema Chodron teaches in one of her SoundsTrue series. This is the seed of Wisdom to come, I've learned...

To give a little context for that observation...I also find myself deeply thankful for a teacher-mentor from decades ago now, a man of deep faith in the power of the Spirit to transform transformations (he would say, picture below...). His work offered a pattern I have seen unfold innumerable times in my life of the Sacred, a consistently trustworthy pattern. In contrast to most assumptions about 'living faith,' it actually begins with a goad into discomfort (if we think of it in linear order). Not comfort or ease, not agreement with what you want. That's "Christianity" in empire, keeping you comfortable and imprisoned in shame/blame/guilt.

The doorway to freedom is discomfort and dissonance. Those are signposts you are living some kind of faith, not just thinking about it. Then the pattern demonstrates a human curiosity and irrepressible drive to scan for sense-making in that discomfort. Why is it different than what I expected? Why does this sting so? What is the root of the pain? This period can last a long time (like it surely will here in Ohio. (Sigh)). Eventually, though, our frames of reference eventually shift somehow, so to receive insight, to see anew that which was always there but simply inconceivable, unseen with what we'd known before. Until the frame of reference was large enough to hold what-clearly-is. A huge release of energy can come at this moment--a Eureka! or Oh! Why didn't I see that before?!? kind of energy. Then words come to make sense of inside, but also then to those around you. This is not only in religious/spiritual terms, btw. This is Einstein and the theory of relativity. This is Niels Bohr and his quantum mechanics. It's even audible in Bach's music.

The point here, however, is that intense discomfort or tension within myself is a sign of something potentially transformative, worth staying-with, maybe even beautiful to come...eventually...if/when I learn to stay with it, get curious about it, face the transformation of my world(view) which will be transformed again and again as I mature, age, grow...

...even though it is also honest to say that it usually sucks at the front end. Good-intentioned people of all faith traditions would rather have easy answers in black-and-white than truly live into the logic of the Spirit that will transform your life from the inside out. I get that, but I also know so many "religious folks" thereby miss out on all the abundance, scandalous grace, and heart-opening devotion and Love institutions can never contain...but we build institutions, not dreams or life-giving communities, right? Soren Kierkegaard told a parable of geese wobbling to church to hear how they could fly, only to wobble and squabble home.

So I have been wrestling with this tension in myself, seeking discernment amidst incredibly shifting sands: I take great satisfaction in my capacity to hold ambiguities, to practice bridge-building between irreconcilable opposites or divergent voices in earnest listening. It's a huge part of my own self-understanding, a pride in who I am, even as it is also a way I am with others, hoping to charm others into greater capacity to hold ambiguities, to see all sides of something "they already know about" but don't, fully. Because we never do, fully, ever. 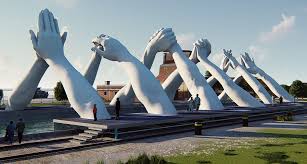 This week, I’m really wrestling with this question … What does it mean to open my heart in a fundamental way to those who voted for Trump, for reasons beyond my ken, even using my sizeable imagination and every grain of salt I can hold in my large white hands? How do I make sense of choices made by good-hearted people whose refusals I cannot even begin to name but which I feel and see how they threaten all I had thought more of us held dear? Hold dear? I've gotten pissy seeing all the FB memes about being a mature adult who remains friends with those across the political divide, even though I am committed to that too. But I'm pissy because something essential here needs saying, I think. There is difficult work to do in ourselves (me being a white woman in Ohio). 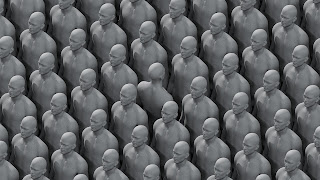 Waving off this 'something' as some 'political difference' shrugs off something absolutely essential to being human today. I don't even know how to describe what "this" is, but it's essential. And I can't just shrug it off to political differences. There is something fundamental about how broken Christianity is today, how broken-gridlocked government is today, and how good-intentioned people are getting ground up--grinding one another up--in fear, hatred, and violence while calling it faithful. I want to build bridges and yet...how? When a deep vulnerability has been exposed on the one hand, and the 'other side' just shrugs it off? Untenable for me. I cannot shrug it off.

Of course, I don’t have any answers to any of this today, even to say more of what "this" could be... And please note the emphasis on practice in all that above. No one is good at this in our country today, though the more-healed of us have a responsibility to hold space for this question. But there are no experts in something like this. Yet, the challenge must remain hanging here...How do we invite deepening engagement in those who want to simply shrug it off? How do you get people to care about something that they've not cared about before, or they've considered insignificant to their life, story, values? Particularly if to care means feeling discomfort and dissonance with what they know-think they know-wish they knew?

I’ve often said to my students, when teaching/learning in interreligious/intercultural or pastoral care courses: defense mechanisms are there for a reason, so should be honored. No one gets the right to force ‘their teaching’ onto you, forcing their way through your defense mechanisms “for the sake of good.” That kind of teaching is violent and authoritarian, and ultimately lives no trust in any Power More Than the One in Front (usually the teacher), highly ironic for a theological school, in my opinion. I’m therefore a necessary fan of “there’s not a right or wrong answer in my practical theological course, which is set to deepen your own ability to reason contextually and discern spiritually… There are better and worse answers, of course, evaluated by [these criteria]. But I do not judge ‘right’ or ‘wrong’ (by and large) in my classes, because I cannot evaluate a student’s context and situation from afar. [It is possible to fail my courses, but it requires proof of hatred and an utter refusal to engage in any self-reflection...surprisingly, it's happened but it's actually pretty infrequent in my 16 years so far…]. So how do we honor defense mechanisms of others AND urge-encourage-invite them into what-is, which discomforts and disorients before it opens and transforms...?

Ironically, much liberalism within higher education presupposes a forced-response method,  litigated through school policies and legal statements of what ought to be, within the values and ethos of the school. Without such an approach, we never would have begun to value the voices of women, of those previously unheard in the hallowed halls of higher education. I cannot count the shoulders of the number of women I'm standing on today because they fought the political battles in policy-political terms in institutions that refused to honor their voices, wisdom and more. Until shame or some other political motive pushed through statues and laws, policies and regulations...which are now eroding because no one's hearts were changed from the inside out. Power-over and political hardball has been the pathway to where we are. Which, to be clear, I’m not against as an approach in educational institutions, particularly if no other paths or tools are recognized. To quote the West Wing episode--I know the value of a proportionate response now. "It's what we have," says Leo. Yet I wonder.... Are we nearing enough of a brink to actually consider process and humane wisdom? Because we all know the fruit of hardball in our civic discourses today. Litigating transformation of the heart is impossible, with a process that is violent and dehumanizing of the story(ies) involved.

I am no longer surprised at much this week, when I really sit with it, feel my way into it. It dawns on me now, in a bit more cried-out-calm while still awaiting resolution to the election: what I experienced may not have even been surprise, as much as it was resistance. A refusal, alongside finally the inability to refuse, to resist seeing.... When I don’t surrender to surprise, I do feel the pain of incongruities, the fervent desire for something I sense to not be so. I resist seeing what-is...and I feel pain, disorientation.

Resistance is often my preliminary response, after all, to refuse awareness of some deep belly sadness, grief, and yes, even anger. (For good or ill, anger is my go-to...it feels ‘more in control’ than being sad, and my control-impulses are strong). Consistent in my body’s learned defenses, I also resist utter joy or ecstasy, which you’d think everyone would want to feel, even if not express openly or loudly. Nope. In my family’s heritage and in my family’s religious tradition (Presbyterian Church), deep feeling is suspect, to be identified in rational categories, and thought into its purpose or box. Feeling and expressiveness of too much was politely unacceptable, whether perceived ‘good’ or ‘bad.’ So to reconnect inside, the capacity to feel what arises, to sense what is really present, is a struggle for me. I suspect it is a struggle for most of the people I know, actually. Emotion is perceived as weak, being out of control, sometimes even irresponsible.

But If I were to surrender… If more of us could see our resistance as the cause of the pain, not the actual what is of this week… If more of us would open our hearts in a fundamental way (Leonard Cohen again), seeing ourselves more clearly, refusing to project “it” onto “them”... Really taking on the reality that we (largely white folks here in Ohio) co-created (without consciousness, even without malice, but with refusals…)... How might more of us begin to see Us...and then more clearly...all of Us?

Sitting with all of these tensions, then, I remember that I can never build bridges alone, that it takes two shores and risked construction between them. I, myself, am not the bridge, nor am I responsible for others’ choices or journeys. I can be invitational, however, and learn alongside… I can practice protecting my own heart when she needs it, like she did this week. I can continue to stay in the discomforts and invite others into them as well.

Changing how we live in community, in civic rhythms, needs to change here in Ohio. I don’t know the pathway forward, but I do know that it won’t be easy, nor pretty. At first.

It will be stunningly beautiful “on the other side” of the decades to come...if/when more and more of us lean in...