Welcoming Home Our Loyal Soldiers...Could Some of Us (Who Can) Even Ask the Question? 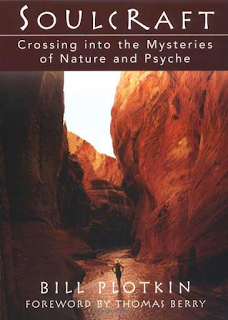 Our country needs to find a way to honor its loyal soldiers, and I’m not only talking about our armed forces. I support our troops and am thankful for their service. What I want to talk about, however, is a way of honoring our loyal soldiers when the war is done. We have a problem in this country with never-ending war, whether on land or in discourse--Afghanistan/Iraq etc. or “war on drugs” or “war on crime” etc. I am not criticizing this state of affairs--it is what it is--but I do want to observe that we have little honorable way or cultural rituals for our loyal soldiers to return to peace.

This post begins with a story I learned from Bill Plotkin, ultimately to invite us to think creatively about this dynamic in our country, in our civic/uncivil discourse. I want to invite us as a society to consider and then perhaps create new ways to welcome home the loyal soldier. [Credit where it is due: much of this comes from Plotkin, Soulcraft: Crossing in the Mysteries of Nature and Psyche, pp. 91-94]

(image from FujiArts, "Vengeance of the Loyal") 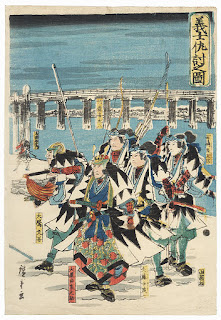 The image I want us to consider comes from the end of WWII, as Japanese marines and soldiers who survived shipwrecks or plane crashes in the Pacific found themselves stranded, alone or in small groups, on uninhabited or sparsely settled islands. Some of them managed to endure despite extreme conditions and severe social-cultural isolation. As Plotkin observes, one of the most astonishing things was that “these men exhibited an extraordinary, perhaps fanatical, loyalty to their military mission. Unaware that the war had ended, each one, upon being found, was ready to immediately return to the war effort.” They were told that the war had ended...but the war could not be over for them. The war is what kept them alive all those years. In one case, he was found 35 years later. Imagine trying to live in a renewed society after that many years "at war", even if only in his own mind...

The Japanese, wise in the ways of honor in their culture, welcomed home the rescued soldiers with great honor and celebration. Despite the men's stubborn belief in the cause of military empire building, which had been clearly discredited. Japanese society had been decimated and then rebuilt; empire building was no longer what the society as a whole pursued. These loyal soldiers missed that development, in their isolation. Even so, society offered a sustained welcome to all these men as heroes, over months and years. This eventually enabled the soldiers to reinvent themselves and to productively rejoin their society as it had evolved.

As gruesome or counter-intuitive as it may sound, particularly given the level of suffering now more visible in this last year...I think there is something here we need to listen to, learn from. Plotkin’s use of this story is for a psychological journey, a journey to soul deeply rooted in Nature and Mystery. But in essence, he weaves it into an invitation for us to awaken to the loyal soldier who lives in each of us.

Each of us has a sub-personality that has functioned since early childhood to keep us safe, to read the needs and norms in our family of origin and protect us by making use of them. For some of us, these strategies are subtle psychological protections against emotional neglect or 'typical' family dysfunction; for others of us, these strategies are overwhelming internal-defenses necessary to protect us from abusive parents, drug addiction, failing schools, domestic violence, cultural shame and more. If you’re an adult today, your “loyal soldier” has kept you safe enough to be here, just as you are.

The problem, however, is that the Loyal Soldier’s strategies can become such bedrock to survival that they will be defended to the death, even after “the war of childhood survival” is over. Even after you’ve grown up and provided a viable-enough life for yourself. Even when you’re in a solid marriage and contributing to your local community. A superstitious belief system develops to give your Loyal Soldier battles s/he can fight. This belief system and these strategies become absolutely and eternally necessary to protect the wounded-one within, the emotional-sensual-playful-vulnerable part of each of us. The intimate self we share only with our loved ones, if even them. Because always, the Loyal Soldier in each of us can choose to disbelieve that the war of childhood survival is over. Many of us do not know life that does not include this kind of "everpresent war, out there." The loyal soldier may even intentionally provoke new battles just to prove his/her point.

All the while...these strategies prevent any development of deeper growth, deeper listening and learning, maturing relationships in a human community, or even just our own wholeheartedness (able to experience grief and joy both, intensely)... These strategies keep us isolated--except for those with similar survival mechanisms--alone, afraid, dissociated from our vulnerable Heart within...who can see the suffering of others, enter into compassionate holding response, act kindly in the face of violence, etc. Without a welcome home that honors him/her, gives times to re-invent and recreate, the Loyal Soldier creates war everywhere s/he goes.

See what I mean? There is something here for all of us, but especially for the 74 million of us who are facing the 70 million of us. A portion of our country’s population is demonstrating their loyal soldier subpersonality. It is not ALL of who they are, even if it is being the most visible right now. To ask in an uncomfortable way…

What is our human collective wisdom-responsibility to welcome them home, honoring their passions and creating spaces, finding ways, for them to re-enter a society that is not the one they thought it was…?

Can we we find a way to honor the intention to love our country so much, to fight for what they believe in so much...?

How may we create safe and viable ways for them to stay engaged, with honor, but more as the fully-human-being they are on the inside, that we can’t see amidst the violence and fear-mongered patriotism?

There is a better way to live inside, and with one another...and if we know it, we need to begin living it "out loud" in a welcoming, inviting way.

Trump has shown us more of who we are as Americans, as ugly and even horrifying as we may find it to be. I've been reading liberal Blue posts like "The nightmare is over" and "Let's be friends again, no matter who you voted for..." But the nightmare is NOT over, nor CAN we simply be friends again while so many of us refuse to see the backbreaking, violent realities of so many others of us. 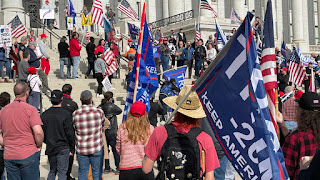 White America is resistant and ignorant.

Police are doing the best they can in this hornet’s nest, with some ‘bad apples’ traumatizing communities they are supposed to protect and other ‘good apples’ trying to find the moderate ways to build bridges.

Immigrants are finding their ways to survive in one of the most hostile American eras I’ve known, voting from their own double-edged sword of surviving truly Socialist countries (Cuba) and beginning to thrive in our country with an odd relationship to the word socialism.

The Republican leadership is refusing to accept the election results, and President Trump is hiding out in the White House, except when he plays golf.
Regular Republicans are trying to get on with their lives, hoping they can withstand what they did not choose while praying for the President.
We need to consider this dynamic, this question.  Demonizing Trump supporters simply makes "us" who "we" accuse "them" to be. There is no honorable or saving-face way for half the country to really look at what and who we are, as a Whole.
Those more healed always hold space for those who are healing...How do we welcome home as loyal soldiers those who need to know that this war is over and there is a society opening space for them, just as they are...so they can reinvent themselves and become peaceable human beings? How do we create spaces for a different personality to come through, inside each of us? How do we go about creating safe spaces for us to change the story, change the dynamic, break the cycle? 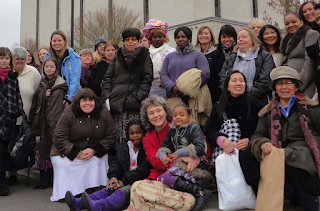 I don’t know, in the end...but I think we could learn a lot from the Japanese. The honor/shame culture in so much of Appalachian heritage has imprisoned so many of us, for so long. How do we break the cycle of shame, the wounded white-man-ego, the "I'd rather die than lose or look vulnerable" culture of this loyal soldier America?

Honor, somehow...space to grieve...time for all of us to reinvent ourselves...for the sake of the Whole.