Collective Habits of Mind in White America? How Do We Begin...Continue...? 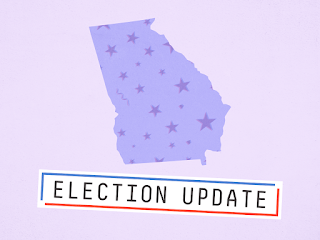 “Stacey Abrams certainly made her mark today,” she smiled, musing aloud over her coffee the morning she and her husband awoke to the news Georgia was turning Blue. He looked up from his iPad, having been immersed himself in the unfolding election drama. “It’s white voters in Atlanta who are shifting the State,” he said. She startled, and looked at him for a while, considering. She returned to her own read of the news.

This hypothetical exchange demonstrates something that seems particularly White and even potentially damning for all of us today, as endemic to higher education as it is: knee-jerk contradiction and refusal to consider larger stories than we hear on first impulse. Our immediate assessment may be one of racism, a prejudgment of some event within racialized terms. And it is that, because if you have White skin in the USA, you are interwoven with racialized presumptions. (See “Everyone’s a Little Bit Racist,” Avenue Q, for a light-hearted banter about this. To deny being a racist is to presume one could be a purist and not have racialized assumptions, a thing impossible in the USofA history and caste system). But I want to ask a different kind of question, while not contradicting that one. 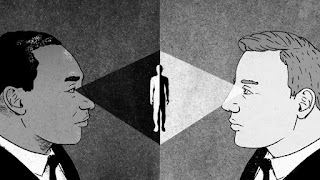 This exchange illustrates a habit of mind that is initially not collective...that doesn’t have a broad collective sense underneath it. Stay with me...this may take a little bit to get at, within text. This is a quiet, typical exchange between a husband and wife (who are both white), and yet a curious one too. The wife’s statement was true, no matter the color of voters. [This assessment should be deepened to include the sisters with whom Abrams made her mark in Georgia politics (Tamieka Atkins-ProGeorgia, Helen Butler-GCPA, Nse Ufot - New Georgia Project, and Deborah Scott - GA Stand Up). An illustration of collective-thinking, as Abrams has repeatedly offered in the social media and news media acclaim she has received]. The husband’s statement may have been accurate for the voters of that particular county, in metro Atlanta. It would take research to confirm. But why draw the distinction in the first place? Why the need to contradict a statement as bland as "made her mark"? Why the need to state it was White voters? Why not presuppose a collective in which Black and White voters together made the difference?

I have found myself wondering how such a pattern could arguably originate within White heritage and what, if anything (else) can be done about it within me? Within those I love? Deep within the white bodies I know...what impulses rise and why?

I’m connecting dots from something that clicked within me this past summer, when I heard a YouTube video of a man I’d never heard of before: Stephen Jenkinson. He is the focus of a documentary, Griefwalker, and has founded an educational community called Orphan Wisdom. 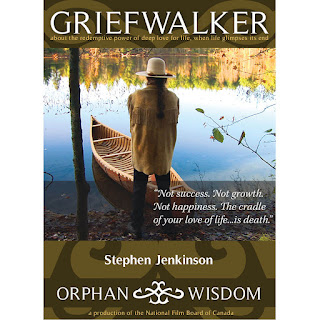 To cite from Wikipedia: “Orphan Wisdom is a method of inquiry gathered together and wondered about primarily, but not exclusively, by Stephen Jenkinson. Jenkinson expresses his experience in seeing what modern Western people "suffer from most is culture failure, amnesia of ancestry and deep family story, phantom or sham rites of passage, no instruction on how to live with each other or with the world around us or with our dead or with our history. Orphan Wisdom wonders about the origins and consequence of this state and contends with building skills to be in the presence of this fact.”  [To hear Jenkinson’s voice, you can listen to the first of seven clips here. It’s about 18 minutes long.] In this clip, he shares observations that I never really considered, having swum in the American politic unconsciously for so many decades.

My paraphrase of his observations in the video: The ancestors for so many white bodies in the USA today chose--out of necessity, most likely--to cut ties with all that they knew, to make a new life without economic servitude or religious persecution.  White bodies today have a heritage of disconnection and dissociation from all that came before, all that could not be survived. A friend/mentor of mine has quipped, with a smile: “Western ancestors are the least employed on the planet. They never get invited to help with anything.” To survive in the New World required a break with elders, with the wisdom of what had been before. A break in the human generational, ancestral line. Quite distinctive in the thousands of generations of human beings on the planet. White bodies broke with collective habits of mind to survive ‘on their own’ in a New World that they gambled on having a better chance at life than where and with whom they had lived before. This elemental decision of so many, over so much time, could so easily have this deleterious effect on white bodies’ ability to think collectively, to live through persecution (real or simply intergenerational-body-memoried). So much of the White American consciousness is this differentiation, this tendency to depart and divide.

Of course, it can be idealized in the notions of American self-sufficiency and individualism that can be seeds of innovation and artistry. But it can also show up in an utter refusal of limits, of loss, leading to an unconscious belligerence we are seeing so much of today, in White populations. (If communities of color are deemed 'belligerent,' I would call that conscious-activity, with good reason lived in their bodies, needing to protest to be seen and heard.) Or more subtly, this tendency can show up in an unconscious, kneejerk reaction of contradiction and refusal to see any larger pattern in anyone else’s suffering, anyone else's lineage. Like can happen over morning coffee, reading the news.

Regardless of the verifiability of such an observation, the question remains before us… What will it take for White America to develop (again? From within?) collective habits of mind? Ones that do not differentiate and divide from a larger and larger pattern of  meaning-making in the world?

The context of the conversation with Stephen Jenkinson was elderhood, an apparent crisis in elderhood. One can hear his words as commentary on the crisis of leadership in our world today, or more broadly, the challenge within American norms to value aging, becoming an initiated elder (able to sustain and share the wisdom of a collective), honoring the lineages through which we come, as American individuals. I think we could agree that our country is in a crisis of leadership, what many cultures would call elderhood. We have vastly different cultures surrounding what leadership is supposed to do/be, and what/whom we can accept as leader. We could parse until the Eschaton the modern-trope that young people need to lead in our world today, but thousands of generations of human beings have lived in cultures where young people didn’t have to lead...where the culture actually initiated its adults into elderhood, living wisdom of the collective as a whole. We do not live in a culture of initiated adulthood, moving toward elderhood.

Our leadership in the United States does not (by and large) demonstrate Elderhood: wisdom of ancestors, accountability to heritage/lessons learned, collective habits of mind, willingness to compromise/collaborate for the sake of the Whole, making unpopular decisions for the sake of the majority’s care of the minority, caring for the least-last-lost-poor-left-behind. [Note: not the leader’s care of the minority, but the leader’s leadership of the majority to care for the minority.] If anything, our government(s)--State and Federal--are increasingly adolescent (which I realize is an insult to adolescents). We are governed, heightened by media-sound-bites, by either/or thinking, win/lose philosophies, winner-takes-all money-driven discourse, refusal to compromise or collaborate, ultimately, name-call and disrespect of all who are not in ‘your tribe.’ Hardball, or nothing. 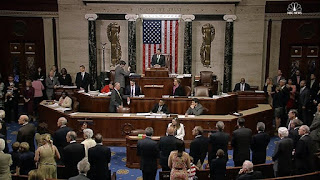 It’s junior-high-time in the Senate and the House, driven by the worst impulses of power-over, greed, and disdain. It’s Junior-High Time in American politics because that is who we have become as an electorate. We do not realize that very few of us are in touch with our heritage, few of us are attuned to the reality of democracy (and its fragility) and its intense demand to be able to hold irreconcilables side by side as a community, as a collective caring for all.

Lots more could be said here, of course, but for now… How does this crisis in elderhood originate for White America? How can we begin to look at our habits of mind that immediately contradict, resist, and refuse...all without throwing out science, the critical mind, the need to refine our common discourses with intellect yet steeped in the heart?
What work does White America need to do to reshape collective habits of mind, that more easily imagine larger patterns around us beyond what we know or have experienced?
What if what White America needs to wake up to is not only what we're hearing from communities of color--all justifiable--but elementally how white minds think in higher education? How they have been shaped in Protestantism, one of the most conflict-and-schism oriented traditions on the planet?
This would also be a HUGE inroad into liberal disdain...at root of higher education is this prioritization of criticism, of skepticism, often at expense of charity/caritas, of interdependence.
How do White people relearn COLLECTIVE habits of mind and body? How do educated White people learn their own predilection to criticize and demonize the unintellectual? Hmmmm.... 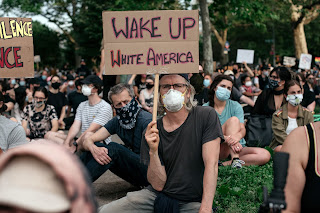