Defend the Majority...? A Day of Insurrection by a Violent Minority

DEFEND THE MAJORITY read a sign behind the podium at a recent Pence rally for Kelly Loeffler. The context for this is, of course, the Georgia Senate races, which the Republicans hope will support their control of the Senate. For these years, the Republicans have been the majority party in power there. Today seems a day of shifting winds in Georgia, but we'll see. 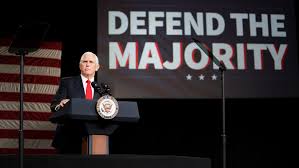 A subterranean sense of the phrase hits something deeper, more pressing today, however. Pro-Trump supporters are at this moment storming the US Capitol building, delaying the final steps of the Electoral College vote for Joe Biden’s presidency, which will begin January 20th, 2021.

BBC sends me notifications on my phone (the only news outlet I keep ‘notifications’ ON for--some semblance of objectivity from across the pond), and now guns have been drawn by police to defend our US Congress. Someone has been shot.

Meanwhile, I’m blessed to be on a text strand with some African American pastors, Doctor of Ministry students I serve, who are asking the very real and good questions: Where are the dogs? Where are the water cannons? Where is the tear gas? BlackLivesMatter protesters? ALL were present. “This isn’t protesting. It’s terrorism,” observed one of them. A dear colleague in this group is actually there, to be a sacred witness, not only because it’s his hometown but because he is a fervent advocate for Beloved Community. But he’s also a realist. I suspect he knew this was coming, in his bones, because he’s lived so much of this chaos as a black man in the USA.

The popular vote shows over 7 million more votes for Joe Biden. Over 60 law suits have failed to prove any claim of fraud that would change the election. (There are always isolated examples of some fraud, every election, but even Trump appointed judges and election officials have claimed this is the cleanest, most dependable election in history.] Several of the law-suits were summarily thrown out because there wasn’t even enough evidence to deserve what is called “standing” before a court of law in our currently-not-United States. An hour-long phone call of Trump and the Georgia Secretary of State--recorded and then given to the Washington Post--shows an overwhelmed narcissist unable to perceive the reality of his political demise, moving eventually into criminal intimidation and threat.

Surely NOW my Trump supporter friends have a little bit of doubt about this man? I'm not saying "saying anyone else was right," but at least doubt? Even if only 25% of it is true, it's still 25% of damning evidence.

The majority has already spoken, America, even if it's not said what many of us had hoped we would say. And today, I find myself asking: what does it mean, from my remove in Ohio, to DEFEND THE MAJORITY?

The sub-terranean charge I am really wrestling with now has to do with white rage, specifically white male rage. It’s being expressed on the Washington plaza right now in both genders (which is different than being gender-less). DEFEND THE MAJORITY is an outraged cry for having created a center in which to stand, and then having lost that center. I want to try to parse this a little bit, but gently… 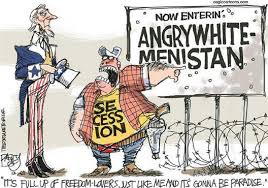 One of the reasons that I love circle-way leadership so much is that there is no one in the center of a circle. NO ONE. Not male. Not female. Not gender non-conforming. NO ONE. We humans get too easily confused in our power struggles with one another and with Mother Earth, trying to either stand in the center ourselves (to protect our safety, desires, needs) or more likely, to put someone else in the center who will (protect our safety, desires, needs). So many of us don’t know that there can be life without someone in the center. As a matter of fact, life is better for more of us if no one is in the center. But we've all now inherited a world in which a Center was created, and it then sets up the power struggles of who is in the Center...or who is 'other', on the periphery. 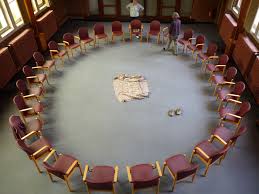 What if we began again to create ways of gathering where we bumbled around for a while, living Center-less, with one another? What if there were a way to live without power struggles for any Center?

Those questions, I realize, are for a different day...but they are important to listen to now, and to awaken to the possibilities of being together in ways that don't prioritize power struggles or the shaming of those who move (or are moved) to the outside of power.

This mob on Washington right now is full of raging white men and the women and children who are in their thrall, those who have lost the Center in a presidential election, and now in the Senate. (On some newsreels, I did see some photos of black and Latino/a supporters, of course, so accuracy and transparency of what I’ve seen on the news. That said, I’ve seen and known the macho/bastardized-masculinity-behavior from decades of life in Ohio. It’s white in this manifestation. If it was Brazilian, that machismo would be Brazilian...this is USA born and bred). The amount of violence being imposed on what has otherwise been a peaceful transition of power is stunning to most of us, accustomed to seeing this kind of behavior only in other countries. Those who have gathered--now qualifying as a "mob"--have chosen violence and insurrection in attempts to impose their perception of America onto the whole.

And when do men (or masculinized women) resort to violence (which so many of us seem to do today, usually in words, but now in action, guns, brawls?). When they seem to have no perceivable options in their way of life to protect themselves, their desires, their needs.

Alright then...let's get to it...together...Perhaps one of the first things we need to do in reconsidering citizenship is to brainstorm together new options for white men (and women) who are feeling so angry as to become violent, so proud as to become dehumanizing, etc. (I do not deny that this is not a 'becoming' thing as much as a 'becoming visible' thing...this dehumanization dynamic is embedded within capitalism and American history itself). All this is reminiscent of an early post, I guess... Without negotiating with terrorists, how can a wounded, bleeding United States yet welcome home its 'loyal soldiers' who don't know the war is over? The country they love needs to move on, preferably with them (for the good of the whole, who refuses to leave behind any American)...

Said in my feeling voice then...

What the fuck is the pathway in our country to personal dignity and healed belonging for white men (and their families) with Appalachian honor-shame heritage in their bloodlines, unable to “be seen as weak” or “needing to protect” or “grieving their lost centrality” in a world growing beyond them? If we meet their violence with our own, we’ve become what we are laboring so hard NOT to become. I recently learned about an all-black militia, formed in Atlanta, finally set to protect black lives in America. A clever name, in my view: NFAC, the Not Fucking Around Coalition. I smile, but know in my belly that this is a bastardized-masculine confrontation of violence with violence. Maybe it IS the way of the world, but it’s not the Way of peace or spirit. So what the fuck is an alternate pathway?!?

I can already hear one of my teachers… Grieve what you need to grieve, Lisa. Anger is the sign of unresolved grief. So I will tend to my own work after I write this...but it begs the question here: 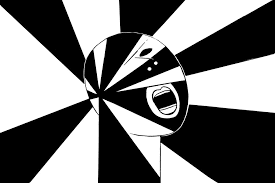 How can We the People invite white men and women within this stream of living here in the States (not United) to release our anger and sadness and fear in different ways than violence, insurrection, terrorism?

How do we hold space for failure for men (and masculinized women) that is not shaming?

How do we hold space for white (persons) to learn different skills, behaviors, responses than all that is socialized within them to know as true, sacred-patriotic history?

How do we invite white men into sacred redemptive work that so many so clearly do not want to do?

Can we require white men/women to feel their own suffering and begin to heal from it, because there are ways we don’t know yet to do this work...together? No, but...Can we...? No, but...

When will so many of us who refuse to do the inner work of healing in this country finally awaken to it, if not for ourselves (because we’ve been told that is selfish), then on behalf of others, the common good, human decency and belonging?