The sun was shining Sunday afternoon, so I took myself for an hour-long, loop walk through the neighborhood. I needed to feel my feet on the ground and the sun on my face (underneath my warm cap, of course). It felt so very foreign, however. I have not walked my loop walk in the neighborhood for quite some time, veering on years. The city finally put a sidewalk on the other side, on the road leading down to a nature preserve nearby. That’s the main reason. But no less true is that I stopped walking my neighborhood when seeing all the Trump signs in 2016 made me nauseous. I found myself walking the neighborhood on Sunday, curious what I might see. A delightful surprise awaited me, but so did a sinking feeling of “here we go again.”

One of the corner houses on the main thoroughfare road I drive regularly has taken down all its Trump regalia. There had been up to five Trump/Pence signs on the lawn, at one point, and a Trump flag pinned to the side of the garage facing the road. Each time I would pass by, I would marvel at the need for multiple signs and large flags blazing. Emphatic loyalty, I understood it to mean, when I was feeling generous. Other terms would come to mind if I was irritable. “Huh,” I thought to myself. The passing of a megalomaniac’s thrall in at least one Ohio family. 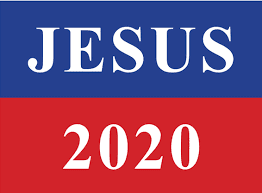 The sinking feeling arrived when I then saw the symbolism that remained. A large sign remained in the front yard, close to the house, white letters on a black background: JESUS. Slightly reminiscent of the JESUS 2020 signs I saw at the Riot. The driveway had a black-faced ‘lawn jockey’ in the corner, by the garage. I hadn't seen one of those for decades, though my neighbor across the street when I was growing up had one. Part of why I disliked it so, besides the obvious racist/blackface stereotyping of the figurine today. I glanced across the street and saw the neighbor opposite also had the JESUS sign. I paused in the street for a moment, just taking it all in. My relief that all the Trumpist regalia was gone. My dread that all that frustrated energy devoted to a megalomaniac was now being directed toward this 1st century carpenter whose name is used for more damage than I as a seminary professor can stomach gracefully. I walked on, remembering I was walking to feel my feet on the earth, the sun on my face. 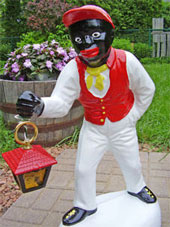 It was good to be out in my neighborhood again, even as it felt so very strange, knowing what I know now. I think I saw one Biden-Harris sign as I started out, but most other detritus from the political election season was gone. It was marvelously quiet, though suburban people were working in their garages, washing their cars in the sunshine, tending to their yards. I found myself sad and curious, in both compassionate and voyeuristic guises. What stories are locked within these homes, with parents and children, men and women, trying to survive economically and physically in a global pandemic? What babies have been born? Have any died? What grandparents have come to stay? Did they live? How many of my neighbors actually voted in this season? Did anyone from my neighborhood go to DC, believing they were there on patriotic holiday…? Did anyone from my neighborhood go, fully armed, with intent to harm Representatives or Senators who know Biden’s election is legitimate? Radicalized conspiracy theorists must  live in my neighborhood too, after all. I actually attend to statistics and find them informative, if critically assessed over time. Who in my neighborhood thinks January 6th was no big deal...still...after these many days…? I walked on, remembering I was walking to feel my feet on the earth, the sun on my face.

A dear friend and colleague offered some really important words tonight, into our small circles here in Dayton, but available to any and all who might receive them. “A Jesus I do not know: Christians and the Capitol Riot.” David Watson serves as Academic Dean at the seminary where I teach, write, serve. He and I differ on many many things, but I know his leadership heart and have appreciated deeply his passion for the historic Christian faith. Folks in his denomination who disagree with him--who have probably been on the receiving end of intellectual discourse and debate--have painted him as a fundamentalist or a sexist, Evangelical man, or worse. I don’t get into the disputes he/they do, so I get to experience him as David, brother in my root tradition of Christianity, colleague, remarkable Dean who can hold the vagaries and tensions of a quite diverse faculty without imploding. I find myself thankful for his words tonight.

He itemizes the Christian symbols visible in the Capitol riot and refutes their use in the name of Jesus, in a Capitol riot. Things like

He then begins the uphill journey of reclamation to name the Jesus he does know, who would not be a part of any such event as happened on January 6th. “Jesus — the real Jesus — does not bow at the altar of politics. He does not require the assistance of the kingdoms of this world. He transcends all governments, states, and borders. He cannot be held captive by any political agenda. He is not an ideological wax nose. Jesus — the real Jesus — is Lord of all. And attempts to remake him in our image, no matter how sincere our intentions, are affronts to his lordship. We do not honor him by parading his image in displays of political showmanship. We do not honor his cross by distorting its meaning for political gain, nor do we honor his name by co-opting it in the service of some other cause. Jesus is the cause, and he is too holy, too righteous, too perfect to serve as a spokesman for our this-worldly enterprises. We are not his masters. He is ours, and he abides no rivals.” I think my favorite line is “He is not an ideological wax nose.” But what I love about these words? A nuanced Evangelical position, which never gets good press and I can find wearying for myself, but which is also worth honoring and supporting too. We need all points of view that have not been radicalized, like Sen. Josh Hawley, for instance. These words counter his version of Evangelicalism. We need every perspective willing to come to the table and not insist on taking it over for himself (or herself, but that's less familiar or habitual).

Jesus stands at the center, as for Christians, he does. The “Lord” language retains the patriarchal power-over dynamic within the church, but has theological integrity if one is attempting to speak honestly of a wholly other God become human flesh, dying, rising again. These words also give opportunity to listen for “sincerity of intentions” in the riot and damage inflicted last week. “No matter how sincere our intentions”... Our intentions… A compassionate assumption of “we,” “ours.” So many wounded and grieving today will not follow him here, but it’s an intellectually virtuous thing to do, in a piece like this. Then the closing line of the paragraph: “We are not his masters. He is ours, and he abides no rivals.” Again, scriptural language within a patriarchal worldview, laced with slave/master imagery, which lands so painfully for progressive ears...AND...he moves into the necessary historical critique of cultural Christianity, the Christianity enslaved to wealth, power, status, and more. All that Constantine opened the door to in the 4th century of the Christian community’s life together. The Jesus symbolized and bastardized in the Capitol Riot is not any Jesus he knows. Nor is it a Jesus I know.

I don’t know all that I want to say in this confluence of my Sunday Sabbath walk, and the good, pointed words of a friend proclaiming that all the Christian symbolism at the Capitol riot had nothing to do with the Jesus of the Gospels. I needed those in leadership in my institution to speak out, and they have. I needed to hear his words for myself, simply receiving them as a friend, from a friend. But I'm sad too, easily slipping into hopelessness in these days...

Far right Christian believers won’t hear such a critique without accusing the loss of faith by ‘a liberal.’ Far right Christian believers don’t yet realize that faith that doesn’t question, faith that doesn’t doubt is what needs to be lost for the real Jesus to live and breathe anew. The Jesus whose utter refusal to be the Messiah the zealots wanted him to be, in face of Rome… This Jesus... “though he was in the form of God did not regard equality with God as something to be exploited, but emptied himself…”  So JESUS. A black sign with white letters. In a front yard. It speaks an opening to me, but also a wall and a mountain. My own calling lives here all the time, so of course it would look like this to me…

How do we do the work of breaking open such rigidities, such refusals to consider anew faith, hope, love? How do we invite deepening awareness of the lure of power to compensate for sadness and loss, unresolved grief and anger? When will “faith” not become the blinding salve to the suffering within, attempting to “spiritualize it all away”? My uncle has often spoken of this bind with an image that seems particularly vivid today. “Most Christian Americans have received a religious tradition and expression well-suited to further capitalistic White America, but which innoculates them from the real thing.” We get just enough of the false, socialized, domesticated “tradition”, which prevents us from opening to the Real Thing. Or perhaps the words of G.K. Chesterton: “Christianity is not a failure. It’s just not been tried yet.”

Lots to chew on tonight, but at least walking around my neighborhood is getting easier. Waiting for the other Trump flag I see most days when I drive to be taken down. He’s done the Universe’s bidding to wake us up a bit more. Time to go...He’s gotta go.